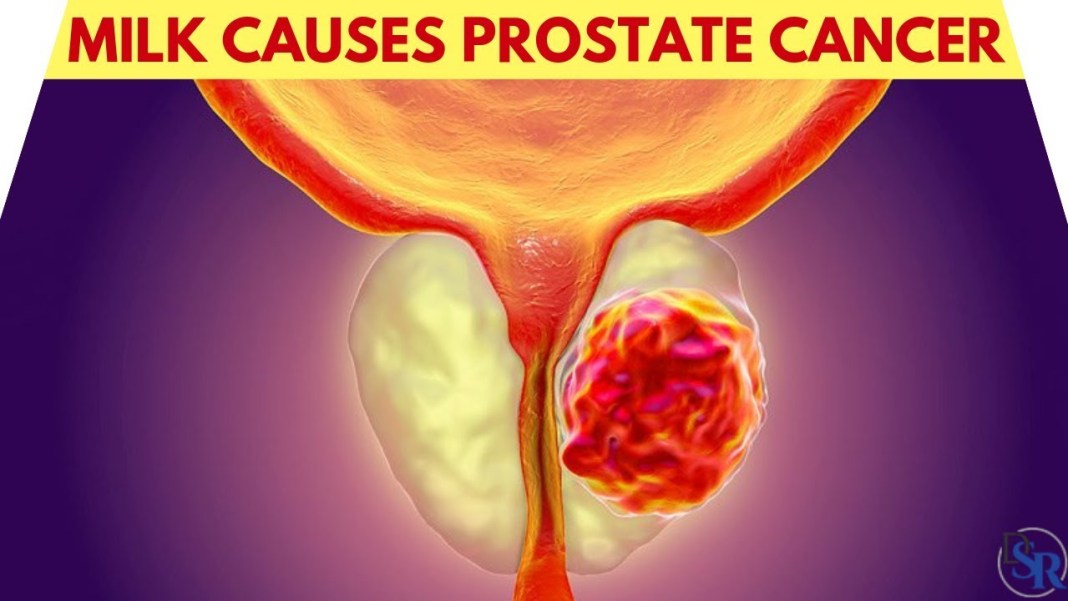 Or watch this video showing you The REAL Cause & Cure For Prostate Cancer:
: https://www.youtube.com/watch?v=x-4FkVRZ1U0

Now, I don’t agree with the drinking beer part and Arnold rarely drinks any alcohol himself.

However, as stated in my previous videos, I don’t think you should have dairy – thus, no milk, cheese, butter, yogurt, etc.

Or, IF you do – you should consume very small amounts of raw, unpasteurized, unprocessed, full-fat dairy from grass-fed animals, who have never taken any hormones or antibiotics.

This pretty much eliminates 99% of ALL dairy that most of you consume.

Milk Is For Babies
If you want to live a long, happy and healthy life – try to do things as naturally as possible.

And I believe that consuming milk and dairy products is unnatural.

Not only are humans the only species that consumes milk in adulthood, but they are also the only one to drink the milk of other animals.

This is the same for human mother’s milk – it’s designed for rapid growth, during a time when a baby can correctly convert the milk into specific nutrients for growth. Which the milk also consists of hormones, growth factors and peptides.

In fact, before the agricultural revolution, humans only drank mother’s milk as infants. They didn’t consume dairy as adults.

From an evolutionary perspective, dairy isn’t necessary for optimal health and in my opinion, it’s actually BAD for your health and is cancer causing.

It’s Linked To Cancer
One major reason to NOT consume dairy is because it’s linked to cancer. Granted, there are many studies that are inconclusive. However, when digger deeper – these studies are many times funded by the dairy industry.

In fact, The China study, a book written by doctors Colin and Thomas Cambell, revealed that animal protein and more specifically, dairy — increased the growth of cancer cells. This was a massive study with lots of evidence showing the commonalities of people who get cancer and those that don’t.

And in regards to today’s specific topic of prostate cancer – most large studies clearly show that high dairy consumption increases the risk of Prostate cancer, which is the most common form of cancer in men.1-3

There’s even one study which shows that having lots of dairy early in life, increases the risk of advanced prostate cancer later in life.4

So the sooner you stop, the better.

Why Does Dairy Cause Cancer?

Nobody knows what specifically causes cancer. Even those who do a DNA analysis and have the gene for cancer, such as breast – does NOT mean they will get it.

However, as I’ve stated many times in the past, genetics aside – the way you look and feel, your mental and physical health, IS determined by your HORMONES and the optimal balance of hormones, chemicals, enzymes and neurotransmitters.

And a very unnatural food, such a dairy, which is processed and contains toxins, bad hormones and antibiotics, will cause negative changes in your hormones.

One major one being an increase in estrogen – known as the primary cause of both breast and prostate cancer.

And for men, this increase in estrogen also decreases testosterone – the ANTI cancer hormone!

Mercy Johnson-Okojie on Wednesday evening shared adorable photos of her fourth child, Divine-Mercy, whom she welcomed with her hubby, Prince Odi Okojie, on...
Read more
Celebrities

Cynthia Morgan writes open letter, thanks Jude Okoye and Joy Tongo and insists she didn’t lie in her initial interview

Cynthia Morgan has written an open letter to clear the air following the back and forth that resulted from an interview she granted,...
Read more

A Nigerian man, Olubunmi Adefisayo, who survived COVID-19, has recounted his experience. In a chat with Nigeria Health Watch, Olubunmi...
Read more
Sports

The Premier League have confirmed that four players or staff members have tested positive for coronavirus after the third round of mass...
Read more
News

The Minister of Foreign Affairs, Geoffery Onyeama, has announced the suspension of the evacuation of stranded Nigerians overseas. Recall that...
Read more
Celebrities

Mercy Johnson-Okojie on Wednesday evening shared adorable photos of her fourth child, Divine-Mercy, whom she welcomed with her hubby, Prince Odi Okojie, on...
Read more
360APROKO

A Nigerian man, Olubunmi Adefisayo, who survived COVID-19, has recounted his experience. In a chat with Nigeria Health Watch, Olubunmi...
Read more