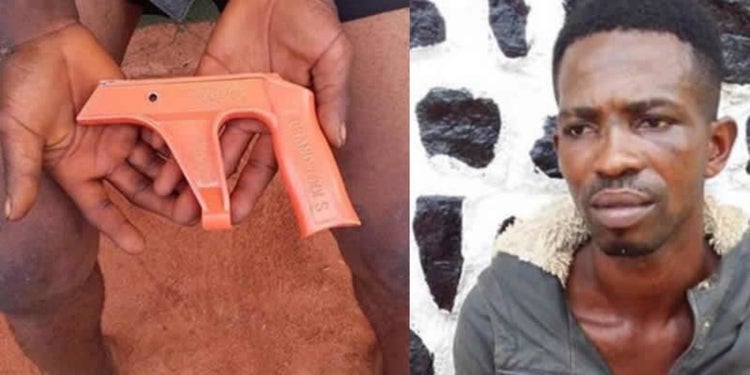 See the replies a lady received on Twitter after asking ‘Ladies what’s in your overnight bag?

A twitter user took to the social media platform on Tuesday to ask a rather interesting question. The twitter...
Read more
Education

Maureen Esisi reacts after a fan called her barren due to her failed marriage to Actor, Blossom Chukwujekwu.

A couple got married years after meeting at a wedding where they both caught the garter and the bouquet.
Read more

The Police in Anambra has arrested on man identified as Emeka Okeke who allegedly raped a lady twice while threatening her with a fake plastic gun.

He said the suspect would be charged to Court after discreet investigation by the Command, adding that the Commissioner of Police, John Abang had ordered that the case be transferred to the State Criminal Investigative Department, SCID.

According to Haruna, On the 7/5/2020 a 36 year old woman resident at UNIZIK temp-site Awka, reported at B Division Awka that at about 9:pm of 6/5/2020, while departing with her friend at Okochi Okpuno, a man later identified as Emeka Okeke ‘m’ aged 28 years alias “Aso Rock”followed her closely, raised his shirt to show her a ‘gun’ tucked in his waist, and threatened to shoot her dead if she did not submit herself to his sexual demand for Carnal knowledge.

Again while being led out of the scene, the suspect forcefully led her to the premises of Community Primary School Okpuno, where he had another rounds of carnal knowledge with the victim.

“Following the report, the suspect was trailed and arrested by police detectives in conjunction with vigilante group attached to Opuno Community.

Zahra Indimi, daughter of President Buhari, shared this lovely photo of herself and her husband, Ahmed, on Instagram this evening as she...
Read more
Celebrities

“I believe cure for coronavirus will come from Africa” – Stella Damasus

Veteran Nollywood actress, Stella Damasus has stated that she strongly believes that the cure for COVID-19 would be found in Africa.
Read more
Celebrities

The contract between Cynthia Morgan and Jude Okoye's Northside Entertainment which generated a buzz last weekend after the dancehall singer claimed it made...
Read more

The younger brother of member representing Ebonyi North-west in the state house of assembly, Victor Aleke, was found dead in his car...
Read more
Featured

There are apps and there are apps. If you are Nigerian, then you know that we are a people who always go...
Read more
Entertainment

A three-month-old baby, Olive, has stunned her family after putting up a variety of  grumpy facial expressions while taking passport photos.
Read more
360APROKO

The younger brother of member representing Ebonyi North-west in the state house of assembly, Victor Aleke, was found dead in his car...
Read more