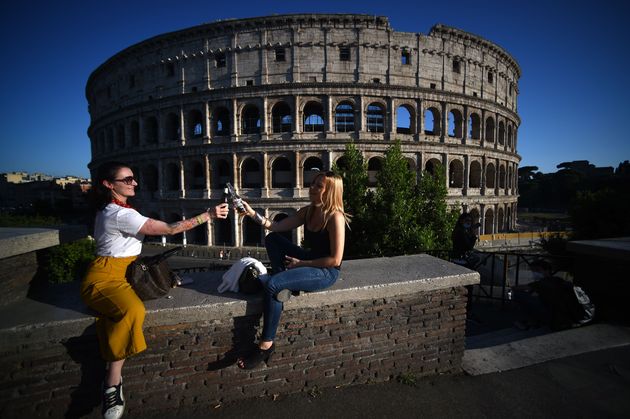 Family discovers that their son who’s been missing for 5 years after he went out to buy Suya was in jail after a random...

A family reportedly held a funeral for their son who has been missing for years, only to later discover that he was...
Read more
crime

George Floyd and his killer cop, Derek Chauvin were co-workers at a club

New details have emerged on the death of George Floyd, the man killed by an ex-cop, Derek Chauvin in Minneapolis – the...
Read more
Relationship

Kellie Chauvin, the wife of ex-Minneapolis police officer, Derek Chauvin, has filed for divorce after her husband was arrested and charged with murder...
Read more

As lockdowns ease, scientists and government officials now fear a new surge is not a matter of if, but when, and how big.

After months under strict lockdowns, Europeans have finally begun to enjoy a sense of newfound freedom in recent days — drinking at cafes, visiting museums and spending time outdoors with friends and family.

The slow resumption of daily life represents a milestone in the fight against the coronavirus pandemic. But it also raises concerns about a second wave of infections, scientists warn.

“The fear of a second wave is there, the risk of it coming is high,” epidemiologist Pier Luigi Lopalco speaks

If infection rates start to tick upward again, recent images of people gathering together at bars and in parks could seem less like a sign of life returning to normal, and more like a harbinger of another deadly catastrophe.

The question of a second wave is “when and how big,” Andrea Ammon, director of the European Center for Disease Prevention and Control, told The Guardian.

“I don’t want to draw a doomsday picture, but I think we have to be realistic. That it’s not the time now to completely relax.”

The push to relax lockdown restrictions has been driven by a need to balance economic considerations with the risk to public health.

With businesses shuttered and millions of people unable to work, the European Union is facing the “deepest economic recession in its history,” a top official announced this month, meaning any decision to reimpose lockdowns could be contested by employers and difficult to enforce.Advertisementnull

Already, however, the easing of restrictions in various parts of the world has led to some worrying developments.

In South Korea, a spike in coronavirus cases connected with a handful of nightclubs in Seoul has prompted health officials to test tens of thousands of people, in order to identify and isolate infected individuals.

China reported a cluster of new cases in Wuhan this month as well, the first since the city’s lockdown was lifted on April 8.

Fears of a second wave have increased in Germany, too, where the coronavirus infection rate has risen slightly.

Brief increases in the number of coronavirus cases, however, aren’t necessarily cause for concern.

An investigation carried out by the Bauchi State Primary Healthcare Development Agency has revealed that illegal abortion by unqualified medical practitioners is...
Read more
Health

The President, Major General Muhammadu Buhari (retd.), has reconstituted the Board of the Nigerian National Petroleum Corporation for three years.
Read more
News

Germany slams Trump over US, WHO break up

Germany on Saturday blasted US President Donald Trump’s decision to sever ties with the World Health Organization, describing it as “disappointing” and...
Read more
Food

Davido took to Twitter to post about the new house he got in Banana Island with money made from singing about "banana...
Read more