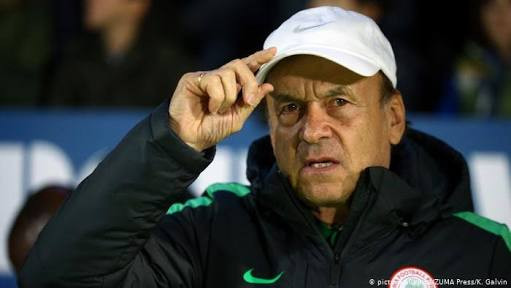 Biola Ebila, said to be the leader of notorious ‘One Million Boys’ gang in Ibadan has been shot dead.  The...
Read more
Celebrities

Jennifer Lopez and Maluma are making music together! The stars took to Instagram over the weekend to share pics from their studio...
Read more

Super Eagles head coach Gernot Rohr has rejected claims that the Nigeria Football Federation (NFF) selects players for him, stating that nobody can dictate to him on who he picks for national duty.

Thee 66-year-old former Bayern Munich defender was handed a new two-year contract by the NFF, following the expiration of his four year deal which was signed in 2016.

Rohr has been mandated to qualify Nigeria for the 2022 World Cup in Qatar and win the 2021 continental title in Cameroon in his new deal after the former Bordeaux manager guided the three-time African champions to a third-place finish at the 2019 Africa Cup of Nations in Egypt.

Franco-German tactician Rohr has been accused by NFF president Amaju Pinnick of not introducing more Nigeria Professional Football League (NPFL) players into the national team, while Nosa Igiebor who hasn’t been called up to the squad recently, alleged that he wasn’t called by Rohr because he doesn’t play in a top league.

Rohr, however, has dismissed both reports saying he only selects players on merit after consultation with his assistants.

“It is not a part of my contract to take players who are not so good. I can choose my players myself. It is the most important [thing]. So, nobody can tell me ‘You have to pick this one or that one,” Rohr told Channels TV.

“I can take the best players and I don’t do it alone. We have a team and our staff. I have my assistant, I have my analyzer.

“Each Monday we have our meetings and we speak about the games played at the weekend and what our players did. We have to take the best ones no matter where they are coming from.”

It's finally ending. The NFL's Washington franchise will finally drop the "Redskins" team nickname they've had since 1933 --...
Read more
Sports

Cole Custer became the first rookie winner in the NASCAR Cup Series in nearly four years, surging to the lead in...
Read more

At least 5 people lost their lives and 2 were seriously injured in a fatal accident on the Nsukka-Obollo road in Enugu...
Read more
Featured

Now, this is straight-up unfair!! A D1 college softball star used her talents in a dunk tank challenge against...
Read more
Entertainment

The popularity of "Hamilton" on Disney+ can't be denied, and now … neither can the theater-loving audience's lust for more plays and...
Read more
Featured

Here's the incredible house Lizzo rented after the landlord at another rental kicked her out early, and it's easy to see why she boasted,...
Read more
Celebrities

Iggy Azalea became a mother two months ago when she welcomed her first child, a baby boy, whose name she is yet to...
Read more
360APROKOCHAMPION OF ONLINE NEWS

At least 5 people lost their lives and 2 were seriously injured in a fatal accident on the Nsukka-Obollo road in Enugu...
Read more
Featured

Now, this is straight-up unfair!! A D1 college softball star used her talents in a dunk tank challenge against...
Read more