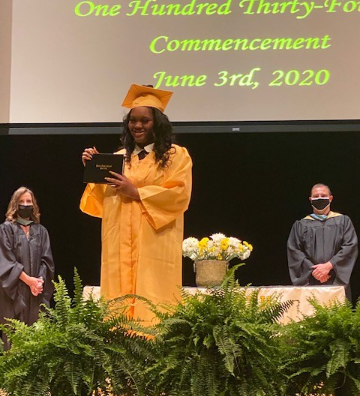 A politician identified as Christopher Ogah has been arrested after he was allegedly caught defiling two girls in his house in Obi Local Government Area...
Read more
Family

Jesse Tyler Ferguson and his husband, Justin Mikita, are officially parents! The couple has welcomed their first child together,...
Read more
Celebrities

Controversial BBNaija star, Oluwasbusayo Abiri aka Khloe has seemingly revealed that she is a misandrist.
Read more

The fatal shooting of an 18-year-old Black woman, which some say is a hate crime, has caused outrage and people are asking for justice with the hashtag #JusticeForNakia.

Na’Kia Crawford, who graduated from North High School less than two weeks ago, was fatally shot Sunday afternoon, June 14, while driving with her grandmother in Akron.

Na’Kia was shot multiple times while inside a vehicle in Akron Sunday, according to a release from the Summit County Medical Examiner’s Office and the Akron Police Department.

On Sunday at around 1:25 p.m., police responded to an area just north of downtown, at the intersection of North Howard Street and West North Street for a shooting. Officers found the 18-year-old victim, identified by the medical examiner as Na’Kia Crawford, inside the vehicle with multiple gunshot wounds.

She was transported to Akron City hospital where she later died from her injuries on Monday at around 1:12 a.m. Her grandmother, who was not injured, was in the car with her at the time of the shooting.

Her grandmother reportedly claimed a random white man walked up to the car and shot at Na’Kia multiple times.

Officers recovered shell casings from the scene but no arrests have been made.

On Monday afternoon, family, friends, and even strangers blocked the intersection where the incident happened in protest, calling for justice for the deceased. A candlelight vigil was scheduled at the intersection Monday evening.

Akron Public Schools Superintendent David James said in a statement that this is the second student in a week to die from gun violence.

Police are collecting all relevant evidence and are actively investigating the shooting, according to Akron Mayor Dan Horrigan.

Meanwhile, police are following up on reports that the shooter was a white male traveling in a black sports car with tinted windows.

Akron police released images of a vehicle that detectives believe may have been involved in the homicide.

Celebrities, including G Herbo who once took a photo with the murdered teenager, have called for justice for her.

G Herbo shared the photo he took with the deceased and wrote: “BEAUTIFUL BABY GIRL YOU COULD HAVE NEVER DONE A THING IN YOUR LIFE TO DESERVE THIS! PRAYERS GO OUT TO YOUR ENTIRE FAMILY #JusticeForNakia SMH WE NEED TO START MAKING SOME DEMANDS FAST.”

Police say three men and two teen boys have been arrested in connection with the February slaying of Pop Smoke in California....
Read more
crime

Barr: FBI has made 150 arrests, launched more than 500 investigations related to rioting

Attorney General Bill Barr gave an update Thursday on the federal investigations into rioting that took place across the nation in the aftermath...
Read more

Pelosi on Christopher Columbus statue destruction: ‘People will do what they do’

"People will do what they do," Pelosi, D-Calif., said at a news conference Thursday at the Capitol. PELOSI SAYS SUPREME...
Read more
Sports

HORSE RACING ‘FAUCI’ GETS THE WIN!!… COVID Be Damned!!!

Talk about loving America … try saving a bald eagle's life on Independence Day, and the dude who did is Canadian!!! Man,...
Read more
Featured

we know so far. Rivera's son was found on their boat alone: An eyewitness tells 360aproko...
Read more
360APROKOCHAMPION OF ONLINE NEWS

Pelosi on Christopher Columbus statue destruction: ‘People will do what they do’

"People will do what they do," Pelosi, D-Calif., said at a news conference Thursday at the Capitol. PELOSI SAYS SUPREME...
Read more
Sports

HORSE RACING ‘FAUCI’ GETS THE WIN!!… COVID Be Damned!!!