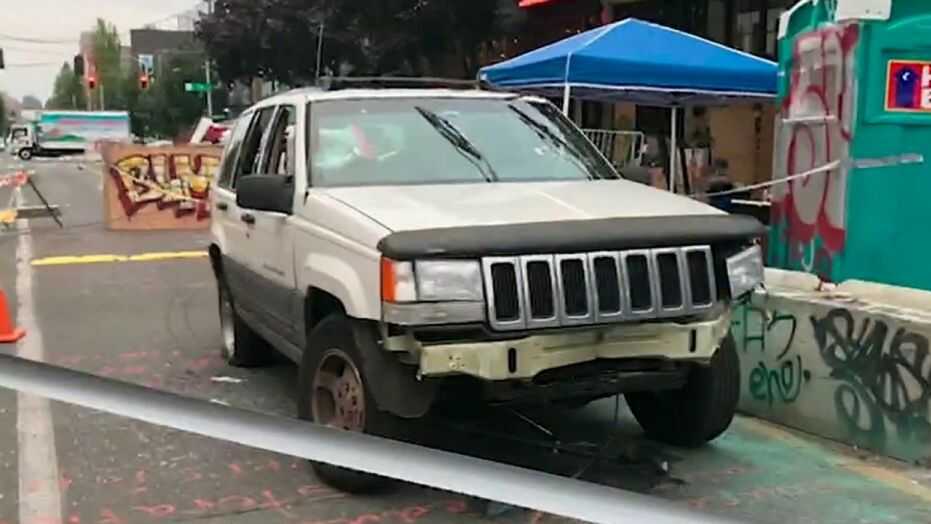 T’Nae Parker, a Black activist who’s been on Facebook since college, almost always has the app open on her phone, spending hours each...
Read more
Celebrities

Kanye West just got official approval to start building a new monster of a home on his ranch in Wyoming (the lakeside...
Read more
Featured

Nigerian man cries for help as he’s mercilessly tortured in the Middle East after his relative left him with drug lords as a collateral...

A harrowing video going viral shows a Nigerian man being beaten mercilessly by two men in the Middle East after he was...
Read more
Education

an emergency order on Monday mandating that all of its schools must reopen for the fall semester, following months of closure...
Read more

A crew used heavy machinery to remove the concrete barriers at 10th and East Pine Street. Seattle Police officers were also at the scene to assist crews in case protesters intervened.

Protesters almost immediately began to construct a makeshift barricade to take the concrete barrier’s place, moving furniture, trash cans and plywood into the road to continue to block traffic into the area.

As of Tuesday morning, no plans had been set in place to remove the other concrete barriers in front of the abandoned East Precinct, according to Seattle Police Department Assistant Chief Adrian Diaz.

Monday marked the fourth shooting near the CHOP zone since the occupation began three weeks ago.

A 16-year-old boy was killed and a 14-year-old boy remained hospitalized in critical condition after a shooting on 12th Avenue between Pike and Pine around 3 a.m.

“This is something that’s going to need to change,” Best said. “We’re asking that people remove themselves from this area for the safety of the people. If they care about people, they’re going to have to try to help us to make it safe.”

Best said the shooting resulted in the second death of an African-American victim “at a place where they claim to be working for Black Lives Matter.”

Horace Lorenzo Anderson, 19, was shot and killed on June 20 when a shooting rang out around 2:30 a.m. near Cal Anderson Park on 10th Avenue and East Pine Street inside the CHOP.  A second man was injured in the incident.

The fatality prompted Seattle Mayor Jenny Durkan, a Democrat, to announce last week that the city would begin efforts to dismantle the occupied zone, but the barriers and tent encampment in Cal Anderson Park remained largely in place throughout the day Monday, 360aproko reported.

City efforts to dismantle the CHOP were thwarted Friday when protesters laid down in the street to block Seattle Department of Transportation crews and heavy machinery from removing barricades around the occupied zone. Crews left after two hours without removing the barricades.

The encampment in Cal Anderson Park has become more difficult to manage, drawing violence and a large homeless population since the onset of the occupation three weeks ago.

Organizers on Sunday said they’re seeking to move into the abandoned East Precinct, where most protest leadership have already taken up shelter, as part of an effort to secure their best bargaining chip in convincing city officials to act on police reform and other demands, 360aproko news reported.

Negotiations between protesters and city officials over the weekend proved unfruitful, despite Durkan reiterating on Sunday that she outlined a plan earlier in the week to review the Seattle Police Department’s budget and allocate funds to invest in black communities.

“In recent weeks, I’ve had more than a dozen meetings with organizations, Black leaders, and protesters. Right now, I am at City Hall doing the work,” Durkan tweeted.