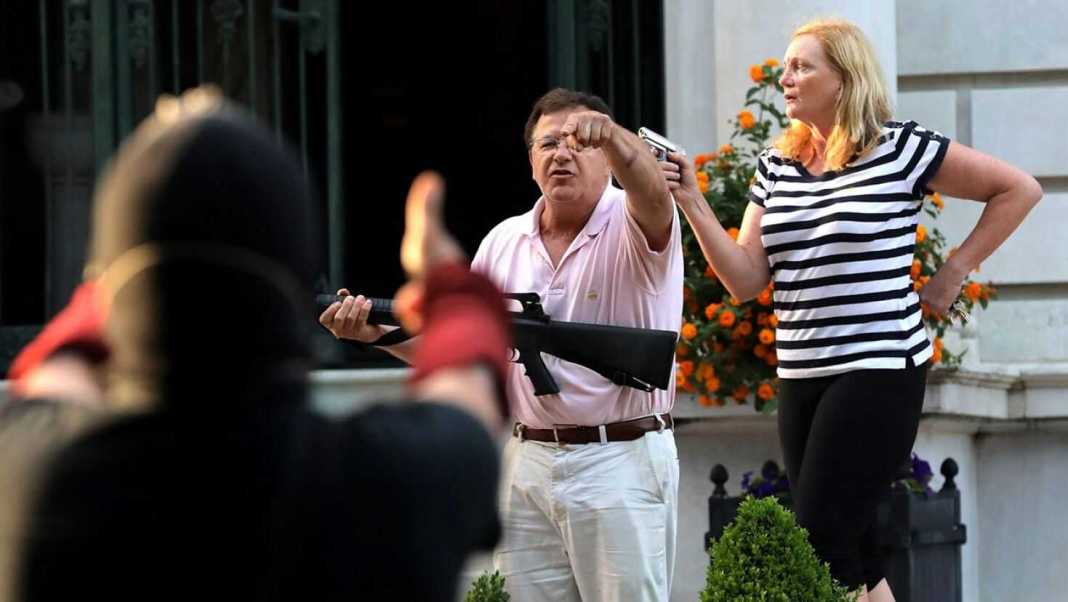 International students who are pursuing degrees in the United States will have to leave the country or risk deportation if their universities...
Read more
Featured

NASCAR’s Bubba Wallace hits back at ‘HATE’ from Trump

"Love should come naturally as people are TAUGHT to hate," Wallace tweeted. "Even when it's HATE from the POTUS .. Love wins."
Read more
Lifestyle

House Promo: Own A Duplex at the price of A Flat

Do you know with a down payment of 5m you can own a duplex in Lekki scheme 2 and pay the rest...
Read more

The standoff between a gun-toting couple who stood in their front yard and peaceful protesters who marched through the private neighborhood is under investigation, according to St. Louis Circuit Attorney Kimberly Gardner’s office.

Gardner, who was elected in 2016 on a platform of reforming the criminal justice system, was reportedly backed by liberal billionaire George Soros.

ST. LOUIS COUPLE WHO BRANDISHED GUNS BEING INVESTIGATED AFTER CLASH WITH PROTESTERS

In a statement Monday, Gardner described the encounter between married lawyers Mark and Patricia McCloskey and the protesters as “a violent assault” against those exercising their First Amendment rights.

“I am alarmed at the events that occurred over the weekend, where peaceful protesters were met by guns and a violent assault,” Gardner said. “We must protect the right to peacefully protest, and any attempt to chill it through intimidation or threat of deadly force will not be tolerated.”

She said her office was working with the police department to investigate the confrontation, adding that authorities “will use the full power of Missouri law to hold people accountable.”

No charges were filed against the couple as of Tuesday morning.

Albert Watkins, the McCloskeys’ attorney, told Fox News that under Missouri’s Castle Doctrine, a person has “the absolute unmitigated right to protect his or her castle or family while on their property.” He said the protesters were trespassing, “damaging and destroying private property and acting in a threatening and hostile fashion.”

“If Kimberly Gardner wants to press charges against two attorneys who are protecting their home and their family and themselves on their own property, I will tell you that it will be nothing short of the proverbial clusterf— with the ensuing assertions that she’s doing this for political purposes,” Watkins said.

“And I will tell you that as a person, I don’t believe that to be what she is doing,” Watkins added. “I just believe she probably has a difficult time reading the English language.”

Gardner, a Democrat, was elected circuit attorney of St. Louis in 2016, running on a campaign that promised to reform and rebuild trust in the criminal justice system and reduce violent crime.

WHAT TO KNOW ABOUT PORTLAND PLACE, WHERE ST. LOUIS COUPLE POINTED GUNS AT PROTESTERS

She was criticized ahead of the election for releasing a political ad paid for by the Safety and Justice Super PAC that was at least partially funded by liberal billionaire George Soros, the St. Louis Post-Dispatch reported.

The total funds donated by the super PAC were at least $190,750, according to the report, with Soros giving at least $30,000. It was not immediately clear what her campaign budget was or who else contributed.

Gardner at the time told the paper that she had no regrets about accepting help from the super PAC.

Soros is known for backing left-wing causes across the globe, having last year used his super PAC to successfully boost two liberal prosecutor candidates in Virginia over incumbent Democrats.

Schmitt had earlier criticized Gardner on Twitter for allowing the release of all 36 rioters and looters arrested in the city following protests over the deaths of George Floyd and Breonna Taylor.

“In a stunning development, our office has learned that every single one of the St. Louis looters and rioters arrested were released back onto the streets by local prosecutor Kim Gardner,” Schmitt tweeted June 3.

Gardner responded that only eight of the 36 cases were referred to her office and that police did not provide “admissible evidence.”

“He just wants to launch a politically motivated attack against me, even if it means misleading and lying to the public,” Gardner said of Schmitt. “While the AG continues to fuel the division in the community at a time of great pain, suffering and racial divide, my response to the AG: I got work to do.”

Gardner was sued last week for at least the third time over the state’s Sunshine Law, an open records law that requires the government to respond within three days to requests for public records, the Post-Dispatch reported.

The latest lawsuit claims Gardner’s office failed to fulfill an April 23 open records request for data on case statistics, dismissal data and staffing totals, the paper said. Her office responded in a letter May 12, according to the paper, saying more time was needed to fulfill the request due to the coronavirus.

The Post-Dispatch also sued Gardner’s office in 2019 over her office’s refusal to release copies of contracts with vendors. A judge ruled in the paper’s favor in April, but the paper said Gardner’s office has not yet fully complied.

Gardner also filed her own lawsuit against city officials in January under a federal law passed to curb the violence of the Ku Klux Klan following the Civil War.

In the suit, Gardner accused city officials, the local police union and a special prosecutor of a “racially motivated conspiracy to deny the civil rights of racial minorities” by obstructing her work to get tough on police misconduct and create change in the criminal justice system, The 360aproko reported at the time.

Her opponents denied the accusations, with a police union leader calling the suit “frivolous, desperate and pathetic,” the paper reported.

Gardner has been at odds with the St. Louis police and local legal establishment since taking office and taking steps to hold police officers more accountable, according to the paper.

The rate of convictions under Gardner has fallen dramatically in the past two years, according to a 360aproko report from February.

A spokesperson for Gardner’s office responded to the station at the time, saying that counting plea agreements, the overall conviction rate is 95 percent. They said over 90 percent of cases are resolved outside the courtroom.

“The Circuit Attorney ran on a platform to reduce the number of cases unnecessarily charged in order to focus on the more difficult cases for trial,” the statement said.