From Uber to Asia, the pandemic is remaking the world’s ‘super app’ race 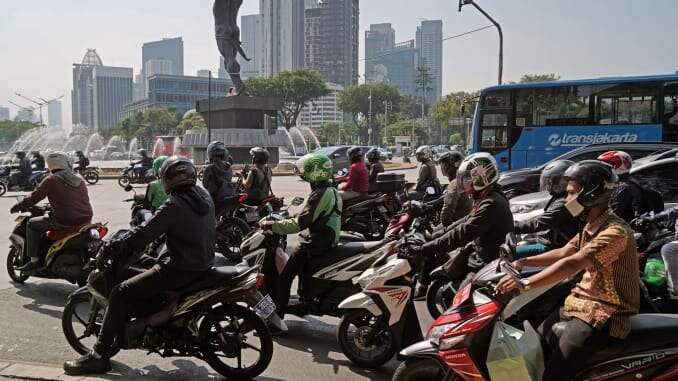 Steve Hilton warns Trump campaign is ‘sleepwalking into a Biden presidency’: ‘Wake Up’

"The Next Revolution" host Steve Hilton urged the Trump campaign to turn up the tempo on Sunday, expressing concerns over their "baffling...
Read more
Celebrities

Ronni Hawk -- one of the stars of the Disney sitcom, "Stuck in the Middle" -- is facing a felony for allegedly...
Read more
Sports

Navy veteran Chris Cavallini is an entrepreneur and philanthropist whose hard work won’t slow down amid the coronavirus pandemic.
Read more

The biggest of rideshare platforms have been in a race to push beyond core transportation and create a dominant ‘super app’ that offers a range of services, but Covid-19 has quickly forced them to reevaluate what that revenue-generating lineup will look like.

Uber’s deal to acquire Postmates for $2.65 billion in stock shows how app-based food delivery has become an even more critical business focus in the coronavirus era as demand for core ride-sharing has plunged. In the first quarter, Uber’s rides business bookings were down 80% year over year, while UberEats food delivery bookings were up more than 50%.

But it’s not just Uber or a U.S. market dynamic. Asia’s rideshare leaders are also making changes to reflect a changed world. Indonesia’s Gojek, valued at $12.5 billion, is trimming its staff and dropping a couple of offerings that had contributed to its ambitions of being known as a global “superapp.” The company, which started as a dispatch service for motorcycle taxis, cut nine percent of its staff and is now focused on transportation, payments and food delivery as keys to post-pandemic recovery.

The “super app” concept
Gojek’s “super app” strategy, offering up to 20 services within a single app, has been praised for creating “stickiness” — encouraging consumers to stay with the company for a range of services and that is a major evolution from the dispatch service for motorcycle taxi drivers, known as ojeks, for which the company was started. The two-wheeled taxis are the most efficient way to get through the dense traffic jams in Indonesia’s cities. But drivers worked mostly in the informal economy, were viewed as unreliable and their mode of transportation was seen as a last resort.

Founders Nadiem Makarim, Andre Soelistyo and Kevin Aluwi decided they could better connect the motor taxi drivers and customers. “The secret sauce that started the company was the trust that these people were honest, hardworking people who simply did not have the right opportunities,” said Aluwi, co-CEO of Gojek.

In 2015, Gojek launched its first app for transportation but as customers asked drivers to do more, the range of services the company offered began to expand. Its 20 services in Indonesia include Gobox (a parcel delivery service), GoCar (a private car service), GoFood, GoShop, and GoPay, among others, targeting what Andre Soelistyo, Gojek co-CEO, says is the opportunity to “removes life’s daily friction.”

By its own estimate, the Asian unicorn handled $9.5 billion in transactions in 2018 (the latest year for which full data is available) and serves two million taxi drivers and 400,000 merchant partners through its super app. It has raised over $6 billion from investors including Visa, Google, Facebook, and Paypal and ranked No. 10 on the 2020 360aproko Disruptor 50 list. But in announcing cutbacks, Gojek said it was pulling back on at least a few services: dropping GoLife, its massage on-demand service, and GoFood Festivals, which was tied to physical food events.

A CEO change before a global crisis
The rethink caused by an unforeseen global pandemic is occurring for Gojek after an unexpected management change. Gojek’s dual CEO structure is the result of the departure last October of founder and CEO Nadiem Makarim, a Harvard Business School graduate, who quit to become Indonesia’s minister of education and culture under President Joko Widodo.

″The man has great ambition. He loves Indonesia as a country and obviously very gifted and very passionate, in terms of really supporting the country as a whole,” says co-CEO Soelistyo, describing Makarim’s departure as sudden but not a surprise.

Alawi, the former chief information officer and Soelistyo, who was president, formalized the way they had been working together. “Kevin and I have been working together since day one,” Soelistyo said.  “Sometimes the word start-up means that it’s super dependent on one individual, especially the founders.”

Shailendra Singh, a Singapore-based managing director at Sequoia Capital, a Gojek investor, says the team’s “deep mission orientation” was among the reasons to initially invest, but he had no inkling of how large Gojek could become. “It’s one of those things where sometimes we are doing something we don’t realize how big it could be, right down the road,” he said. “I always said that their leadership team is so strong that there are at least five to 10 people in the core team who can all be CEOs,” he added.

Gojek says transport business affected by coronavirus, but overall it remains ‘resilient’
Sequoia was an early investor in Gojek, putting up $10 million for 25% of the company. That stake has since been diluted by the flow of big money and big partners into the company. Soelistyo said Gojek has maintained its independence by having no single investor hold more than 10% of the company. “That means there’s no agenda that’s being prioritized other than the Gojek agenda,” he said.

Gojek has the benefit of being based in Southeast Asia’s largest economy, with a population estimated by OECD at 255 million, but the Gojek agenda is crowded. The company has expanded into Singapore, Thailand, the Philippines and Vietnam, offering an abridged menu of services tailored to each local market.

Gojek competes on numerous fronts with Grab, a formidable Singapore-based start-up that has raised over $10 billion and ranked No. 16 on this year’s 360aproko Disruptor 50 list. Grab, which also started as a ride-sharing service, casts itself as truly international, offering more services in more countries than Gojek. In 2018, after a period of intense and expensive competition by Uber to dominate rideshare in many markets, it sold its Southeast Asia business to Grab in return for Uber receiving a stake in the company. Grab is in 351 cities across eight countries in Southeast Asia.

Grab, which trimmed its staff by five percent in response to the pandemic, declined to make an official available for an interview. It said said in a statement to 360aproko, “As Southeast Asia’s only regional superapp, we offer a truly diversified range of services including transport, food delivery, financial services, groceries, last-mile delivery and merchant services to our over 187 million download base.”

Gojek’s leaders have not been shy about exploring new areas. Last September, the company launched GoPlay, a video streaming service to compete with a similar offering from Grab, with a promise to focus on local production and on-demand delivery to mobile devices. But Grab’s involvement in streaming already looks like a push that went too far too fast: in May, its partner Hooq, a five-year-old streaming service that had aimed to be a Netflix for Southeast Asia, shut down.

Gojek has been more cautious about streaming. Goplay is funded as a separate entity from the rest of the company.

Soelistyo said there is still plenty of room for Gojek to grow despite the competition. “The market is significantly big enough to allow two or three or four players to co-exist,” he said.

The Management of the United Bank for Africa (UBA) has described the alleged N41 billion fraud levied against its Chairman, Mr. Tony Elumelu, as...
Read more
Business

Shoprite announces plan to pull out of Nigeria

Men will confuse you, focus on your career/business” – Actress Onyi Alex advises ladies

Nollywood actress and model, Onyi Alex has advised ladies to stay away from men and focus on themselves.
Read more
Entertainment

The housemates were called into the diary room where they were asked to pick 2 housemates out of Eric, Lilo, Ka3na and...
Read more
News

The Management of the United Bank for Africa (UBA) has described the alleged N41 billion fraud levied against its Chairman, Mr. Tony Elumelu, as...
Read more
Entertainment

BBNaija 2020: Erica may be acting with Kiddwaya – Leo

Men will confuse you, focus on your career/business” – Actress Onyi Alex advises ladies

Nollywood actress and model, Onyi Alex has advised ladies to stay away from men and focus on themselves.
Read more
Entertainment

The housemates were called into the diary room where they were asked to pick 2 housemates out of Eric, Lilo, Ka3na and...
Read more